We had a much larger field for the 2018 race than previous years with 119 entries, close to our 125 runner maximum limit.  We set this maximum out of respect both for the ecology of the Mendip Hills and for the people who live there.  There were 98 starters, 92 of whom completed the course, helped by the cool and cloudy conditions which were ideal for an ultramarathon.

The first finisher home was Leigh Horrell from Taff Ely Triathlon in a time of 7:47.  Both he and second placed finisher Neil Kempton broke the previous course record set by Clare Prosser.

First woman home was Cat Mills who beat her 2017 time by six minutes even though this year’s course was over a mile longer.  Cat was second woman last year and was understandably very happy to win this time.

We’re pleased to say there were no serious injuries.  A few people got lost on the way round but they all accepted this was part of the challenge in a self-navigation event.  The most aggrieved were probably the people who ran past the final descent and started a second loop of the course after a passer by changed the direction of the arrow at the top of the hill which had pointed down to the finish.

The last runners home were Stephen Skidmore, a visually impaired runner, and his guide Anna Covey.  They finished with Judith Chubb-Whittle, our last runner marshal in a time of 15:34. Anna unfortunately suffered with ITB problems in the last few miles but did a fantastic job guiding Stephen round the course.

On a personal note, this is our third and final year as Race Directors of the Butcombe Trail Ultramarathon and we’ll be handing on the reins for next year’s race to Matt Claydon who was in charge of the route, maps and GPX for the 2018 race (and ran it as well).

We’d like to thank TACH for letting us set the race up how we wanted it and for topping up our income in our first year, 2016, to help us make a meaningful donation to the Mendip Hills Fund, the charity we support.

We’d also like to thank the rest of the race organisation team who’ve done so much work behind the scenes, especially in 2018 in preparation for us stepping down:

The race wouldn’t be what it is without the marshals and checkpoint teams who  were consistently praised in the feedback we received from runners at the finish line and in messages, emails and social media posts in the days since.  We haven’t taken part in many races ourselves where the aid stations are all manned by fellow runners.  We believe that their encouragement kept people going and is one of the reasons why we had such a low drop-out rate.

Lastly we’d like to thank everyone who’s competed in the race since we set it up.  We’ve really enjoyed seeing so many smiling faces at the finish line and hearing people’s stories.

The race is put on by Town & Country Harriers, a Bristol off-road running club, and we’re all unpaid volunteers.

Any surplus funds generated by the race go to the Mendip Hills Fund, a charity which helps the local community.  A lot more entries in 2018 has meant that we’ve been able to increase our donation from £560 in 2017 to £3,002. 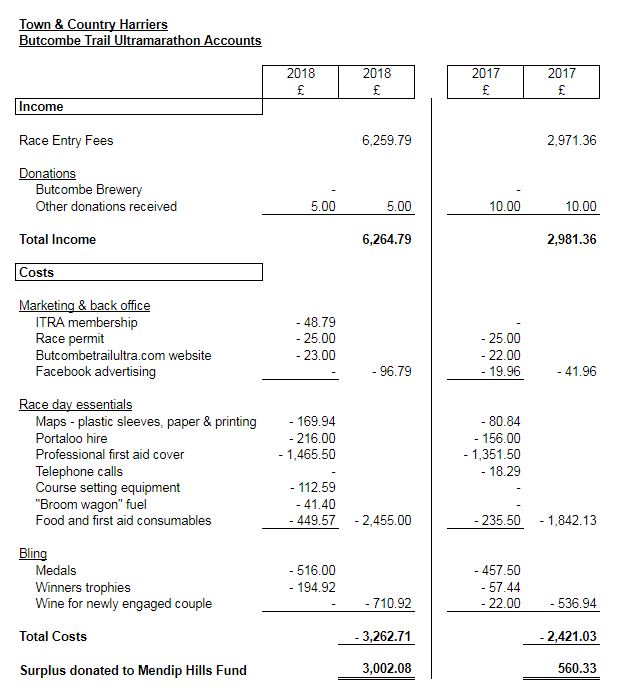